My Interview with American Pie star Thomas Ian Nicholas about Delivering the Goods!

I saw American Reunion a few months ago and felt compelled to buy it I just loved it that much I had to add it to my Blu-ray collection. That and American Wedding were my two favorite sequels outside of the original no knock on American Pie 2 I just felt the latter two movies had stand-out stories. How was it having the entire gang from the original film back in American Reunion? I happen to love the film but it felt like the perfect wrap-up to the series tying up all loose ends it seems. Is the series done or is it possible for more American Pie sequels in the future?

Getting back together with the whole cast was like a reunion in real life. I wasn’t sure what it would be like because I felt so much older and mature. I was married with a kid on the way but as soon we were all in the same room it was like being in high school all over again. in fact it was more like junior high cause all us dudes were joking around, hitting each other in the nuts and laughing our asses off. I don’t know if there’ll be another one but hey, I never thought we’d do Reunion… so anything is possible.

Click the pic to read the full interview @ Movie-Vault.com

Around the time of making American Pie 2 was a busy time for me. I remember filming Stealing Sinatra, Halloween Resurrection and Rules of Attraction all in the same year. I thought that it would be cool that my first horror movie was part of the Halloween legacy. I also got the chance to choose between a couple of characters. I could either die 3rd in the film or 3rd to last. I’ve seen so many horror movies and knowing all the pitfalls I thought it would be so cool to be a semi-recognizable face but die much earlier than the audience expected. My own little inside joke.

Hello, this entire post is about the four volume collection of After Dark Horrorfest films debuting on Blu-ray from Lionsgate. 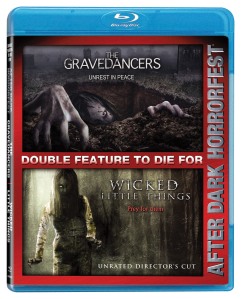 The Gravedancers – After a drunken night of dancing on graves, a group of friends are haunted by three havoc-minded ghosts bent on revenge.

Joe’s Thoughts – Interesting idea, though doubtful it has the making for a good film. Haven’t seen it yet so I really can’t judge.

Wicked Little Things – Recently widowed Karen Tunny and her two daughters, Sarah and Emma, move to a remote home which Karen has inherited from the family of her late husband. However, she is unaware that the home is situated near an old mine, the site of an early 20th century tragedy in which many children were buried alive…

Joe’s Thoughts – I’ve seen this before, a good little film that should spook, but not anywhere near great. Notable for actresses Lori Heuring and Scout Taylor-Compton (Rob Zombie’s Halloween) 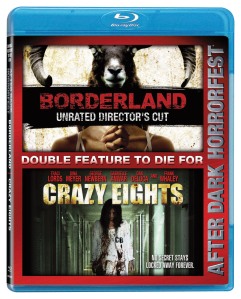 Borderland Unrated Director’s Cut – On the eve of their graduation, three Texas University students travel to a Mexican border town and fall prey to an ancient cult hell-bent on finding candidates for human sacrifice.

Joe’s Thoughts – Haven’t seen this yet. Interesting idea. Could be good or really lame.

Crazy Eights – Six people are united for a journey through their long-abandoned childhood home: a home with a terrible secret and a mysterious dead girl who will lead them to their strange fates.

The Broken – A successful radiologist (Lena Headey) watches her life spiral out of control after she sees the spitting image of herself driving down a London street.

Joe’s Thought’s – I saw this before. Like Wicked Little Things this is elevated by the star, namely Lena Headey (Terminator The Sarah Connor Chronicles, 300). A good mystery-thriller. Interested in seeing this again because it’s been awhile and I don’t remember too much about it.

The Butterfly Effect 3: Revelations – When a man with the ability to travel through time intervenes with the past, all hell breaks loose.

Joe’s Thoughts – I thought this film was vastly underrated. It’s my favorite of this bunch (the one’s I have seen so far). In fact, I think the entire Butterfly Effect trilogy was overlooked by many because all three films sport interesting ideas and good-solid stories.  There is a very graphic sex scene in this one so maybe that hurt it somewhat. If you are a fan of mystery-thrillers you should check this one out.

The Graves – After being lured to a mysterious mining town, two sisters must unleash their most primitive instincts to battle unspeakable horrors – both human and supernatural.

Zombies Of Mass Destruction – A conservative island community is under attack – from brain-eating zombies! Now it’s up to a ragtag group of rebels to repeal the hordes of the undead.

The Making of Zombies of Mass Destruction –

Overall I think Lionsgate did a very nice job here. My major complaint is a lack of extras as the volumes went on. I would have really liked to have seen some extras on The Broken and Butterfly Effect 3. Can’t complain too much. I’m just glad these are now on Blu-ray and hope for similar transfers for the other After Dark Horrorfest films.

I hope you all forgive me for rushing this list, but since I started late and was interrupted by my mom’s heart attack I am going to post the list which I had completed before I started the posts. This is just so everyone can see the complete list pre-Halloween. It might not hold up over time and there is the very real possibility I forgot a movie or something but it’s my list as of now and this is not a definitive list, just my personal preferences. In order from least to greatest here it is

#8 – Night Of The Living Dead (Original)

#4 – A Nightmare On Elm Street (Original)

Reasons why – The Ring is creepy in it’s atmosphere reminiscent of earlier horror films like John Carpenter’s Halloween. It delivers jump-scares even when I know what is going to happen, this film makes my skin crawl. Naomi Watts is really good in this type of horror film. She can’t be blamed for the bad script and special effects of the sub-par sequel.

Followed By – Rings, The Ring Two