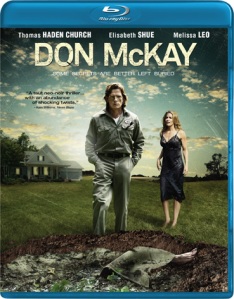 Thomas Hayden Church (Emmy winner “Broken Trail”, Spider-Man 3) is Don McKay, a janitor who regrets making a mistake in his youth. After 25 years he hears from beautiful Sonny (Elisabeth Shue – Leaving Las Vegas, upcoming – Piranha 3-D) his ex-girlfriend and the woman he still loves. She is dying and wants to spend her remaining days with him. Returning to the site of the tragedy, Don rushes to be with her. She is still as beautiful and desirable as ever, but something about her is…different. Wondering if it is sickness that has changed her or something that makes the townspeople act odd, Don tried to solve the mystery while keeping his sanity and life intact.

As usual click the picture to read the rest of my review @ Movie-Vault.com!

Here’s my batch of movies (all Blu-ray unless otherwise noted) I will be working on for the foreseeable future. Batman Begins (currently viewing/reviewing), Don McKay (Thomas Hayden Church & Elisabeth Shue), From Paris With Love (John Travolta), Someone’s Knocking At The Door, Run Bitch Run! (DVD), Avatar, The Edge (Anthony Hopkins, Alec Baldwin). Marked For Death (Steven Seagal), Robin Hood : Men In Tights (Cary Elwes, Richard Lewis). I figure on knocking out a movie a day so stick with me and tell your friends! It should be a wild ride.

Karate Kid is a movie about a teenage kid being uprooted from his Newark, New Jersey home and moving to sunny Reseda, California, where the scenery is better, but just about everything else is worse. Daniel Larusso (Ralph Macchio (My Cousin Vinny, The Outsiders) feels lost and alone, missing his home, unable to talk to his busy mom Lucielle (Randee Heller) and to top off his misery he is being bullied by a group of karate students out to make him pay for flirting with the leader’s (William Zabka) beautiful blonde ex-girlfriend Ali (Elisabeth Shue, Hollow Man). Daniel keeps getting up from his beatings, but his spirits dwindle until he meets his apartment complex’s janitor Mr. Miyagi (Pat Morita, Happy Days, Karate Kid II) takes an interest in the young teen. After saving Daniel from a brutal beating, Miyagi continues to refuse to teach him karate until he meets the bully’s Karate teacher John Kreese (Martin Kove) and learns that the odds are truly stacked against young Daniel. Finally agreeing to teach Daniel karate so he can defend himself, Miyagi also teaches the teen about life, that sometimes two wrongs don’t make a right and revenge benefits nobody. But it is the life lessons that make Karate Kid as relevant today as it was back in 1984.

Read the rest of my review by clicking on the pictures and going to Movie-Vault!

I have the review for Iron Man 2-Disc Ultimate Edition written up and ready to post. Going to hold off until later in the day because I have to post it first edit it, put it up on Movie-Vault.com and add in some cool looking pictures. I’ve had some reviews I wanted to post here that for some reason WordPress wouldn’t upload the picture, it lagged so long I felt I was back on AOL in the lat 90’s early 2000’s. I know one of them is the Ashton Kutcher movie Spread. The other is my Karate Kid review. Karate Kid II will be the next review after that, before moving on to Batman Begins & a movie called Don McKay, that a movie studio sent me to review, starring Elisabeth Shue & Thomas Hayden Church, it’s a weird movie but I will have to view these movies again to give a complete, hopfully entertaining review.