Someone's Knocking At The Door

War Of The Worlds

1 – Band Of Brothers (Best war miniseries ever! Must-own for war movie fans, Speilberg & Tom Hanks fans and anyone with any sense. Buy It!…….Now!)
2 – The Enforcer/Sudden Impact (Sudden Impact = Dirty Harry at his best! Must-own)
3 – Clint Eastwood Collection 1968-2008 (Absolute Power, Dirty Harry, Million Dollar Baby, Mystic River, The Rookie, Unforgiven shall I go on???)
4 – Essential Eastwood Director’s Collection (Letters from Iwo Jima, Million Dollar Baby, Mystic River, Unforgiven cheaper than the above by nearly half the price and some damn fine titles!)
5 – Absolute Power (A very underestimated Eastwood flick. Eastwood+Hackman+Ed Harris=I’m so there! Buy this!)
6 – Bad Boys – (As much as I rag on Michael Bay this here is a fun movie. Worthy of a buy)
7 – The Rookie (What’s not to love? Eastwood & Charlie Sheen shine here, another underappreciated Eastwood flick that should be in your collection)
8 – Air Force One/In The Line Of Fire (These are here mostly for In The Line Of Fire an EXCELLENT Eastwood flick, Air Force One is good but more of a throw-in) and in a tie – Bram Stoker’s Dracula/The Grudge (This is a nice pairing of similar genre movies. A good pairing, nice price. I’d get it)
9 – I Know What You Did Last Summer/I Still Know What You Did Last Summer (I love the first one, as much as I loved that I HATED the sequel. Still with the pairing of the two at about the price you’d pay for the original alone, why not buy this?)
10 – Groundhog Day/Hitch – (The pairing of these two movies is what knocks this down to the last spot. Love Groundhog Day and Murray is at his best here. Hitch…well at least Groundhog day is worth buying. Didn’t see Hitch. Don’t want to)

Notable Mentions – War Of The Worlds (Not so much a fan here, but I’ll review it if Amazon sends it and go in with an open mind on my 2nd viewing of it maybe I’ll like it more on the 2nd go-around), Alice In Wonderland (Kiddies will eat this up. I read on Wiki that this drew in over $1,000,000,000+ worldwide up there with Titanic and below Avatar, just not my thing), The Wolfman (Didn’t see it, don’t know anyone who has, but I’ll have to rent it and see, love Anthony Hopkins though), Someone’s Knocking At The Door (looks interesting, but have to give it a rental), The Strangers (Steve Austin might be a far better wrestler, but his acting skills are pretty decent. I haven’t seen this, but I feel if it is anything like The Condemned it will at least be worthy of a rental), Wild Things: Foursome (I only mention this because a girl from my hometown of Reading, PA is in this so I’ll give my shout out here), The Gauntlet (Need to rent this, forget the movie it’s been so long), 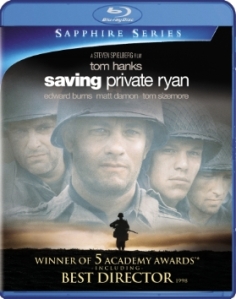 If you haven’t seen Saving Private Ryan here is a brief description – Saving Private Ryan is about a team of U.S. Soldiers, led by Captain John Miller (Tom Hanks) sent to locate and return James Francis Ryan (Matt Damon, Invictus) whose three brothers died on D-Day. Ryan a member of the 101st Airborne Division (whose story is told in the HBO Miniseries “Band Of Brothers) is lost behind enemy lines. Along with his team which includes – Sergeant Horvath (Tom Sizemore, Heat); Corporal Upham (Jeremy Davies, Rescue Dawn); Medic Wade (Avatar) and Privates Reiben (Edward Burns, The Incredible Hulk); Jackson (We Were Soldiers), Mellish (Adam Goldberg, Deja Vu) and Caparzo (Vin Diesel, XXX, The Fast and the Furious) they must survive rough landscapes, hidden enemies, fighting amongst themselves and must overcome their own fears to find and save Private Ryan.

Right away on the opening action scene where the soldiers land on Omaha Beach, the audio stands out and is crisp, clear and amazingly active. Bullets whiz by with a sound that is sweet until you see and hear them hitting bodies, grenades and land-mines explode with a harsh reality that is only worsened by the screams of young soldiers dying and calling for their mothers and splashing fills the air as soldiers jump over the side of boats to escape the bullets. Saving Private Ryan is filled with non-stop audio that overwhelms your hearing. If any Blu-ray is to be a “show-off” for your sound system Saving Private Ryan is it! 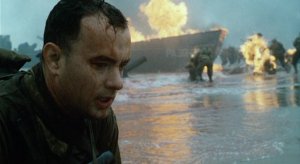 Visually, Saving Private Ryan is stunning and light-years better in comparison to previous releases. The color is more alive, though still as intended: which is to show the grittiness, the dirt, blood, sweat and tears of actual war. Throughout the film you notice that each soldier is covered with grime and are visually and mentally exhausted. As with the audio, the visuals stand out in the Omaha Beach landing. When soldiers explode in a fire-ball the color comes amazingly alive as it does when a soldier uses a flame-thrower to weed out Germans from their hiding place. Grasses are greener and the landscapes are filled with far more detail that previously looked far less impressive.

Director Steven Spielberg masterfully takes you through the opening of WWII for this group of young soldiers. Much like he did with JAWS when he kept the camera at water-level through much of the water scenes, he lets you know what it feels and looks like to be a victim, a participant in this environment and it’s not pretty. The camera is usually somewhere among the soldiers, rarely leaving their sides to show landscapes and the soldier’s point of view. Spielberg does a wonderful job of never glamorizing the war but keeping it as real as he could showing that war may not be pretty, but when there is a just cause it can be necessary. 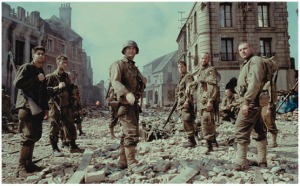 Actors are in top form here with none doing a more impressive job than Tom Hanks.

You can read the rest here – Movie Vault 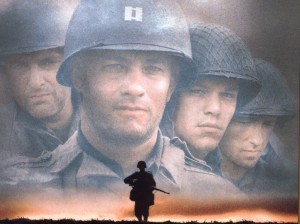 Looks like Paramount messed up on early copies of Saving Private Ryan on Blu-Ray. I was just about to do my review for this and point out the issue when I saw that it wasn’t just me who had weird audio problems from Chapter 15 until the end of the movie. They did a massive recall of over 100,000 copies*

You can read the rest here – Movie Vault