Scream: The Inside Story on Bio Channel!

I just had the pleasure of watching one of, if not the best behind-the-scenes documentaries on one of my favorite movie franchises. Scream: The Inside Story premiered tonight (April 6th, 2011) at 8PM EST. Being the super-Scream fan that I am I had to watch. It would be almost sacrilegious for me to not watch this, but would it be good? Really what could they tell me about Scream that I did not already hear, see in DVD/Blu-ray extras and reading online from various sites? Well, the answer turned out to be a hell of a lot!

A rundown of some things you might not know – Drew Barrymore was originally set to play Sidney Prescott, but had a change of heart and suggested herself that her stardom could be used to throw the audience in the beginning of the film. Scream also has a haunting resemblance of a real-life killing spree which is touched upon in this documentary. Also mentioned in far deeper depth than in the past is Kevin Williamson’s inspiration for writing Scream, Wes Craven’s need for a come-back hit and the casting of Neve Campbell, Courtney Cox and others. The problems with the town and Scream’s crew are really expanded upon. The battle with the MPAA (Motion Picture Association of America) over rating also is discussed. Pieces of murders are cut to get the desired R rating instead of NC-17. What’s ironic is this is shown on a network uncensored whereas minor cussing is bleeped. The irony of censorship never ceases to astound me. Also the discovery of the Ghostface mask in the house flesh out the character and give him a look that was unknown going into the film, much like the film that Scream pays homage to….John Carpenter’s Halloween. 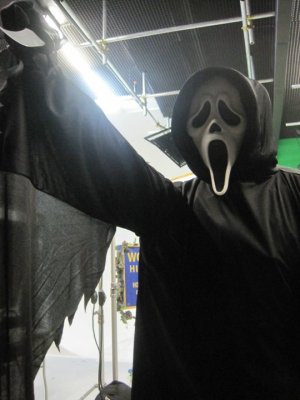 While it is well-known that the story was originally titled Scary Movie (which of course became the title of the spoof of Scream, which is part spoof itself) was changed to Scream, it is not as well known that Michael Jackson’s song Scream helped decide the name-change. Not only was he the King of Pop but he helped define one of the most successful horror series ever in film. Of course the documentary sets up the upcoming Scre4m coming to theaters near you on April 15th, 2011