Open Water 2: Adrift is an unusual sequel, not that there’s anything wrong with that. The main appeal from it’s predecessor is left to tread its own waters with a different storyline. My thoughts on having a bigger cast this time out is that you sacrifice true horror for a different type of genre that is much harder to categorize. It’s like the different between Ridley’s Alien and Cameron‘s Aliens though we don’t get the action here either. Which is better? Hard to say, most have their own personal opinion on it. I liked the characters this time out, though there were a couple who annoyed me. I liked the original Open Water as well and enjoyed it’s horror, but this one felt like the better movie overall. The great thing about this release is you get two films in one. Enjoy!

Hi all. Got some new movies to review. ALL are Blu-rays today. Blu-ray today. That ryhmes, completely unintentional but cool.

The Order (Heath Ledger) – A renegade priest Alex Bernier (Ledger) from a secret order of the Catholic church is sent to Rome to investigate the mysterious death of one of their oldest most revered members. Following a series of similiar killings Bernier launches an investigation that forces him to confront unimaginable evil and the terrifying knowledge that there is a fate worse than death. Peter Weller (Robocop) and Shannyn Sossamon (Kiss Kiss Bang Bang) co-star in this thrilling journey.

Bad Lieutenant – Harvey Keitel is a New York cop hopelessly addicted to drugs, gambling and sex. As he makes his way to various crime scenes his only concern is with placing bets with his fellow cops on the outcome of the National League playoffs. His bad choices leaves him deeper in debt and a life so surreal it feels like hell. A constant use of crack, coke, heroin and booze erodes what is left of his sanity. An investigation into the rape of a nun leads to his spiritual breakdown at the church’s crime scene. He sees Jesus and his road to redemption. Will he take it?

The Blair Witch Project – Set in 1994, three film students travel to the woods of Maryland to investigate an urban legend and find themselves terrified to the core. The friends – Heather (Heather Donahue – TV’s Taken, Boys and Girls), Josh (Joshua Leonard – TV’s Law & Order SVU) and Mike (Michael Williams – Prom Night) – never return from the Black Hills Forest, and one year later their missing footage is found and edited together to tell the story of the amateur filmmakers’ terrifying two-day hike.

Hard Candy – 14-year-old Hayley (Ellen Page – Inception) goes to a coffee shop to meet a 30-something fashion photographer she met on the internet. Before she knows it she is mixing drinks and stripping for an imprompt photo shoot. It seems like it might be Jeff’s lucky night. But the innocent-looking Hayley isn’t as innocent as she looks, the night takes a turn for the worse when she begings a hard-hitting investigation on Jeff in an attempt to reveal a possible scandalous past.

High Tension – Maria and Alexia are classmates and best friends who go to Alexia’s family home in the French countryside hoping to prepare for their college exams in peace and quiet. In the middle of the night a psychotic killer breaks into the house and turns the girl’s idyllic weekend into a terrifyingly endless nightmare. Alexia is captured and thrown into a van leaving Marie to attempt to rescue her from the evil murderer. 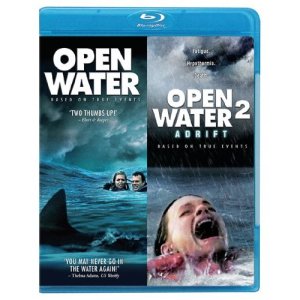 Open Water/Open Water 2 : Adrift – Open Water is based on true events about an American couple on vacation at an island getaway to escape their workaholic lifestyles and marital problems. Daniel (Daniel Travis – Thank You For Smoking, TV’s Cold Case) and Susan (Blanchard Ryan -It’s Complicated, Super Troopers) are both certified divers but when they surface from an underwater tour of a coastal reef they find that their fellow divers and boat are gone! Stuck in the middle of the ocean the isolation sets in and they turn on one another. Soon they wonder whether they will survive the open water in the shark-infested ocean. Open Water 2: Adrift – Is the true story of a weekend cruise aboard a luxury yacht that goes horribly wrong when a group of old high-school friends get together for a reunion and forget to lower the ladder before they jump into the ocean for a swim. As reality sets in the group turns on one another. Exhaustion and the efforts to stay afloat and struggle to get back on the boat soon takes a terrible toll. What started as a joyful reunion ends up as a fight for survival!

Secretary – Lee Holloway (Maggie Gyllenhaal – The Dark Knight) is a young woman with a few strikes against her after having a brief stay in a mental hospital. She accepts a job as a secretary at the law office of E. Edward Grey (James Speder – Stargate, Wolf). The work seems normal at first but somewhere between the typing, filing and coffee-making, Lee and her new boss cross the line of their professional relationship and steam up the office in this sexy dark comedy.